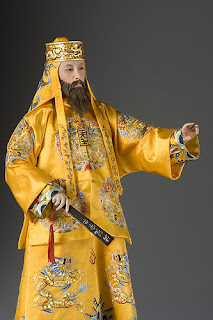 In 1850, Hung Hsiu Ch'uan led the ten-year Taiping Rebellion. He embraced Christianity and believed he was God's second son. He preached communal land ownership as well as equality between men and women. His ill-fated revolt, however, cost 20 million Chinese peasants their lives.

After a ten year hiatus from creating figures from Chinese history, artist George Stuart once again began to search for finely embroidered silk to dress his latest figure from China's distant past. Searching the internet, he located LU Zhengliang Arts Studio in the Suzhou region of China. The figure of Hung Hsiu Ch'uan was to be the first of many collaborations with the Chinese fabric designer.

Stuart sketched the designs he envisioned for his new figure and Lu, studio owner and master 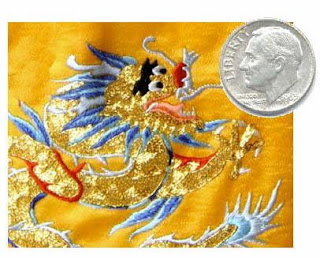 artist, authenticated the sketches at a major national historical museum in Nanking.

"Every stitch in ancient robes had religious and cultural meaning and purpose," Stuart points out, "The challenge to Mr. Lu and his artists was maintain clarity at one-fourth life size."

Lu and his team used special needles and thread to reproduce the designs on the imperial gold silk Stuart had selected for Hung's robe and jacket.

An historical overview of Chinese embroidery can be seen at Lu's website: