Posted by Unknown on December 16, 2010
Following on the previous blog, we are pleased to describe The Civil War Era Historical Figures now on exhibit at the Clinton Library in Little Rock AR. The exhibit is timely in that 2011 will mark the 150th anniversary of the start of the great conflict. The exhibited is dominated by five Figures of Lincoln at different times of his life. Most of the Figures are on exhibit, but more can be seen on our Civil War Era page.

“This exhibit does a magnificent job of humanizing the people who have orchestrated and shaped our country,” said Terri Garner, director of the William J. Clinton Presidential Library.  “The artifacts and documents that accompany these beautifully crafted figures help weave the stories together into one cohesive look at two major events.  As we approach the 150th anniversary of the onset of the United States Civil War, what better time to reflect on the wars, words and figures that changed the course of United States history?”

As in the Revolutionary Period, Great Britain leaders were in a position to affect the outcome. 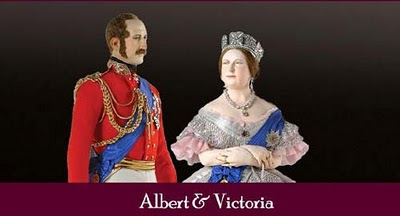 In 1861, Queen Victoria, and England in general, were very pro-Southern, in part as major importers of Southern cotton. When the Queen voiced her sympathies, Albert hushed her quickly. England did not need yet another major conflict. Victoria realized her gaffe and said no more. At the end of the year, Lincoln's navy boarded a British ship and captured two Confederate agents. A big outcry in England followed and Parliament called for war against the Lincoln government. Once more Albert induced a cooler approach and war with the United States was averted. 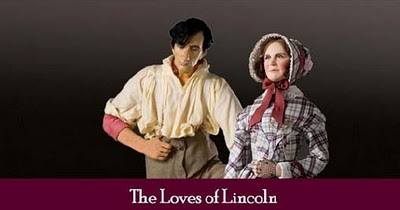 Lincoln liked ladies, even though he felt awkward with women in social settings. His supposed romance with Anne Rutledge, (not shown) during his New Salem years, became more legend than fact. Certainly she meant a great deal to him. Later, Mary Owens of Springfield rejected Lincoln’s halfhearted proposal. In 1839, he met and married Mary Todd of Lexington, Kentucky (above), after an on and off courtship. Their love for one another is well established, in spite of a marriage fraught with emotional upheavals. Mary was at the center of much of it. 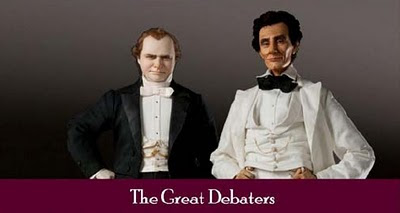 Lincoln and Stephen A. Douglas were both graduates of the Illinois Legislature. But Douglas went on to the U.S. Senate while Lincoln stayed a legislator. During a second election the two debated the main issue of the day - slavery. Lincoln lost, but was soon elected to Congress as a Whig. Northern Democrat Douglas attempted many failed compromises on slavery with Southern Democrats, and it all came to ruin in the War Between the States. The two foes were reconciled in 1861, when Lincoln was elected president. During the inauguration ceremony, Douglas held Lincoln's hat. 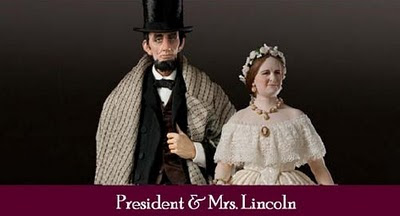 The Lincolns’ enthusiasm over his being elected President was short lived. After an awkward inauguration and saddled with a derelict White House, Mrs. Lincoln dedicated herself to making it the first home of the nation. Resulting expenses plagued the new administration. The war put a damper on the rest of their time in Washington. The death of Willie, their youngest son, was a nightmare for both of them. Mary never recovered. Regardless, when she was in charge and entertaining as First Lady, she was the personification of grace, charm and generosity. She could be the perfect hostess when things went her way. 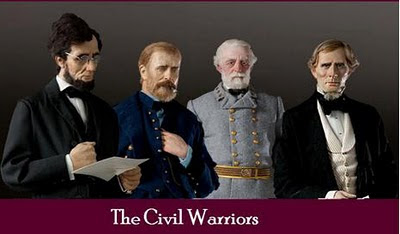 Lincoln never recognized the existence of a 'State Of The Confederacy' and had only briefly met Jefferson Davis (R) 30 years earlier. Nevertheless, Lincoln attempted to treat the South with respect while firmly determined to preserve the Union. Long before 1861, Davis had a distinguished career in the U. S. military and government. Neither of the great leaders wasted energy exchanging charges and slanders. The leading generals who had all served under one flag just a few years before were just as respectful. Nevertheless, Grant and Lee were dogged and ruthless military campaigners. Both remain heroes of the War. 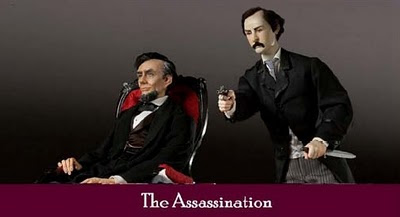 By early April 1865, the war was over and Lincoln's biggest task was to convince the Radicals in Congress to pass an Act of Reconstruction which would have brought the states together once more and would have been his greatest achievement. John Wilkes Booth had long harbored bitter resentment of the Federal Government and its leaders. Booth's partially successful plan to murder Lincoln and his cabinet eventually plunged the nation into a bitter racial conflict. We continue to deal with what has been the United States' greatest tragedy.

Please see the previous post for a description of the Revolutionary War Figures on display.