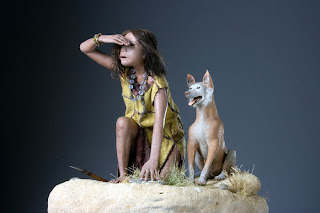 In 1835 a young Native American woman was stranded on San Nicolas Island 80 miles off the coast of  Los Angeles after her tribe,  the Nicoleños were evacuated by mission padres because Russian-led Aleutian fur trappers were decimating their population. Left marooned for 18 years, her dramatic story was played out in Scott O’Dell’s Newbery Medal-winning 1960 novel, Island of the Blue Dolphins and in a 1964 movie of the same name.

She was rescued in 1853, taken to Santa Barbara and named Juana Maria. Within a few weeks the Lone Woman of San Nicolas was dead of dysentery. Unfortunately her native Nicoleño language had become extinct, so a recounting of her life on the island was lost.

Steven Schwartz, Senior Archeologist at Pt. Mugu recently reviewed the known facts about the island and its lone inhabitant at a Museum of Ventura County lecture. Interestingly he gave some evidence that on two occasions the woman may have refused rescue by fur hunters who visited the island. Mr. Schwartz continues to study the remains of past inhabitants of San Nicolas Island. 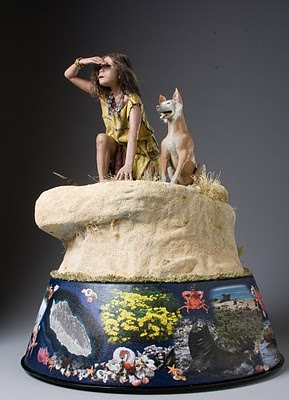 In early 2010, the Museum of Ventura County commissioned Mr. Stuart to create an Historical Figure of this astonishing woman. The elaborate base illustrates the rich fauna and flora of the island. The dog is depicted as a typical breed found among coastal Indians.