Posted by Unknown on April 07, 2011
We all have heard the tales and history about colonial America's Renaissance man. His prodigious works span most of contemporary commerce and science. Of equal importance were his political contributions over decades of service to his Pennsylvania Commonwealth and the fledgling United States of America. His assignments as representative and negotiator took him many times across the Atlantic Ocean to Europe.

Indeed, he was the diplomatic jet setter of his time. His "jets" were fast sailing ships called packet boats that carried mail, packages and a few passengers across the Atlantic in only 22 days. In route the ever curious Franklin studied the "Gulpf Stream" and printed printed a map of its currents to assist sailing ships to faster passages.
George Stuart created an Historical Figure of Franklin as a member of the Patriots and Founders Group and attendant monologs. However, it became clear that Franklin's whole story had to include his activities in Europe. In recognition to his international contributions, the Foundation has added images of his Figure to the English and French Groups on the website.
Franklin is the first to cross over to other groups, and many more Figures are  following his lead. The part Queen Victoria and Prince Albert played in the Civil War has earned them places in the Lincoln Era story.
George Stuart has kindly volunteered to write brief descriptions of Figures in each new context. What follows are his takes of Franklin interacting with each country. 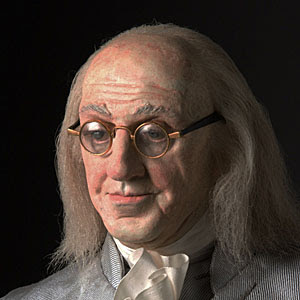 "Benjamin Franklin, son of a poor candle and soap maker, became an accomplished statesman, diplomat, writer, scientist and philosopher. He rallied French support for the nation and was key architect of both the Declaration of Independence and the Constitution. He also helped to guide the Treaty of Paris, which ended the war between England and the new United States.
Ben Franklin's inventions, like the lightning rod and the aphorisms he penned for Poor Richard’s Almanac have become fixtures of American culture." 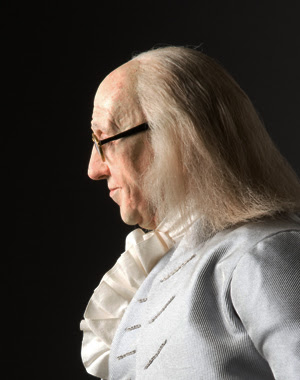 He thought he might make England his permanent home.

"Ben Franklin represented the Pennsylvania colonists before Parliament in London in 1757, and remained several years in England. He was back in 1764 and would protest the Stamp Tax on the colonies. He found that many in the English government thought the policies then being carried out would lead to disaster. Those concerned included the King's brother and the powerful Lord Chatham! Franklin had not fully realized the ground swell against the crown policy.

He would remain in England until 1775. When he found his efforts to change these policies were failing, he returned to America and was elected to the Continental Congress." 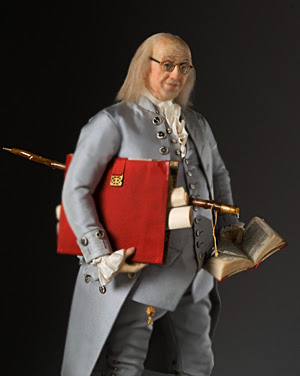 His love affair with France was mutual.

"In 1767 Franklin visited France and fell in love with the country. By the time Congress appointed him the U.S. Minister to France, in 1775, his reputation had made him famous. He was loved by everyone from the count at Versailles to the peasants who had heard of him.

His goal was to gain French recognition of the fledgling United States. Franklin used all the wiles at his command. An American defeat of the British in an important battle was the turning point and Franklin adjusted the facts so as to convince France to give her full support. In February 1778 France recognized the United States of America!" G. S. Stuart

For More in formation, see Franklin on Wikipedia. And stay tuned for more crossovers!