I began my career as a monologist in 1959, my focus was on the history of England and Europe. This is what my studies and research had prepared me for. In late 1962 my managers told me I should prepare a monolog on American subjects. My audiences were Americans who wanted to hear their own history. I contested the notion, and declared the audiences would want to hear something new to them. I was contradicted and told it was just the opposite – Americans wanted to hear about what they knew and familiar to them. Perplexed and dumbfounded, I had to consider the wishes of the professionals representing me.

That year I was booked for the mid-west. While I had a few days layover in Chicago, I decided to look into a talk on Abraham Lincoln. I went down to Springfield, saw the Lincoln home and neighborhood. But having heard of the village of "New Salem" where Lincoln spent several years, I decided to visit that site.

My hotel agreed to arrange for a limousine to take me out to the location. This was February and the "village," an historic site was closed for the season, yet this proved to be a remarkable experience.


Without the crowds and covered in snow, the reconstructed village appeared much as it had in the 1830s. We tramped around in the snow, peering into windows and taking in the setting. The Rutledge Inn was still in operation as the site caretaker’s home, and we were invited inside for coffee and cake. Sitting by the original fireplace with the friendly hosts and their stories of New Salem's history and restoration, I had the surreal feeling of being transported back in time. Overall it was one of the most remarkable "research" experiences I've ever had.


Later that week I visited the Chicago Historical Society Museum, where I was graciously received and my request to see some of Lincoln’s clothes was granted. This also proved to be a one-of-a-kind moment. I was taken to a small room with table and chair. Minutes later a staff member entered with an arm load of clothing, a hat, an umbrella and placed them on the table and left! I was all alone with Lincoln’s clothes – no gloves, no staff oversight.
I measured and made notes as fast as I could and before I was interrupted I tried on Lincoln’s hat! It sank down over my small skull, almost to my chin - Lincoln had a large head. This was an extraordinary research experience, one that would never be possible today. I will remember that moment always!

With these site visits, many biographies, and the help of Dr. Jay Monaghan and the Wyles Library (UCSB), The Smithsonian Institution, the Henry Ford Museum in Dearborn, I embarked on a biographical study of Lincoln, illustrated with portrait Figures (now in the Museum of Ventura County Collection). My objective was a visual record of Lincoln at various stages of his life.

The Rail Splitter
The early portrait as the famous “rail splitter was our starting point. Many artists have attempted this image before me. We all worked from the literary descriptions and, while each had his own interpretation, there are distinct threads of similarity throughout all efforts. 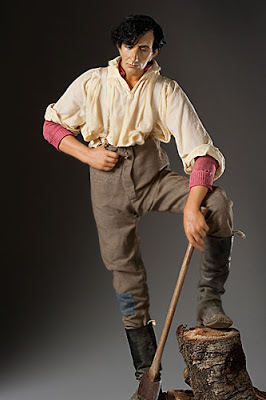 Lincoln as Rail Splitter in 1832
The Springfield Lawyer
The next represented his Springfield days as lawyer and politician in the Illinois legislature. This was also the time of his marriage and family development. His appearance in the white suit is derived from photos of him his sensible summer suit of white linen.
The New President
The third image was to show his new beard on the day of his inauguration in 1860, and to show that he had yet to abandon his out-of-date blanket or shawl, which was being replaced in most men’s wardrobes. A number of his shawls have survived; the one copied here is in the Smithsonian.

The Thoughtful Chief Executive
The next portrait was a pensive pose with glasses and something he was reading or studying. Inspired by either the address he was to give at Gettysburg or his previous decision to issue the emancipation proclamation.
The Tragic End
Finally the tragic portrait of his last moments at the Ford Theater. He was ill and dying of Marfan’s disease, a slow and debilitating illness. The cost of the war, the responsibilities of his office and personal tragedies were prodigious for any human to bare. He was emaciated from illness and shrunken by life, but they say he was happy that night with the end of the carnage and the delight he always took in the theatre. Perhaps there was just a trace of a smile in his face. It would all be over momentarily.
My business manager was correct. The Lincoln monolog has been the most popular piece I’ve ever attempted. I’ve learned to love it as well. Abraham Lincoln is an irresistible subject for all time.