Youthful Encounter with a Royal Palace

Posted by Unknown on March 31, 2013
George Stuart remembers his lifelong affinity
for Versailles and the royal residents.

Years later in 1951, I constructed the first pair of what were to be called the Historical Figures: a depiction of Louis XVI in his robes of state followed later by a second figure that was to be his queen, Marie Antoinette. 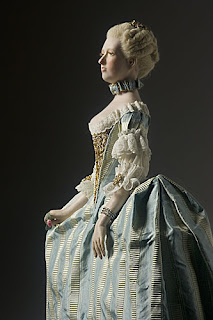 Archduchess Maria Antonia (c. 1765)
One of Empress Maria Theresa’s fifteen children and youngest daughter, she was raised in the imperial splendors of Vienna’s Schönbrunn Palace. She had little formal education except some music and art. She was contracted in marriage to the heir to the French throne when she was fourteen but looked forward to a future at the famous French court.
As the years passed, I became better educated about my subjects, especially Marie Antoinette, so her history evolved into an ideal “story.” I did realize that the average American audience knew little history, although with a secondary education, one probably heard of Lincoln, George Washington, and maybe King George III of England. 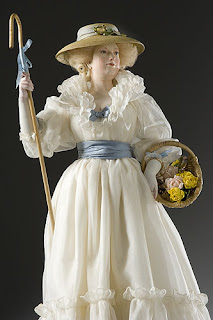 Marie Antoinette at Trianon (c. 1780)
After a childless marriage of nearly eight years, she bore a daughter in 1778 followed by a son in 1781. Her husband, Louis XVI, gave her a private palace (Petit Trianon) and a farm. She and her friends withdrew to these getaways to escape both the duties of court and the public. The Queen was able to fulfill her idolized dream of living like a “simple peasant” especially at the farm, albeit a very expensive “simplicity.”


One might also have read of  Marie Antoinette, as her name was the personification of the frivolous, besotted, self-indulgent queen famous, “Let them eat cake!” She lost her head when the people rose up against the cruel royal oppressors, so while these made good stories, the descriptions of the queen were false.

Over the years, the monologs evolved, and I discovered that “real” and factual history made for the best story. A case in point is the accusation that she arranged the purchase of an exorbitantly priced diamond necklace --she did no such thing. 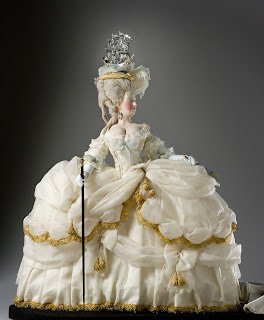 Marie Antoinette in Ball Gown (c.1790)
The Historical Figure of Marie Antoinette went through some seven revisions and improvements over the years; so did the clarity of her life experience. These real stories turned her into a genuine human being with barely above average talents. In truth, either by luck or circumstance, she simply found herself caught in a critical moment of history. 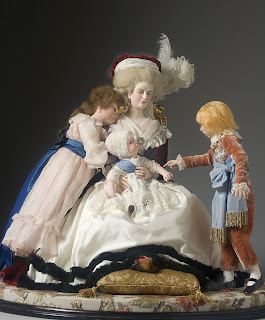 Marie Antoinette with her children from painting by Vigee Le Brun.
It is easy to look back now and see what opportunities Marie Antoinette seemingly had at her disposal to change history. Regrettably, she was tried by those circumstances, found wanting, and finally she paid with a miserable death! Fortunately, it’s easy for listeners of her story to see themselves in her shoes and imagine what they might have done in a similar situation. Now that’s what makes for a good story!
If there was ever a character from modern history who is relevant today, it is Marie Antoinette. Her story parallels the attitudes and actions of so many Americans. First, she was born surrounded by excess and privilege. As a teenage princess, she was contracted in marriage to the heir to the French throne. Then in 1774, she and her husband became king and queen of France when they were only 18 years old. At this time, France was descending into financial disaster. To be more exact, the treasury was bankrupt, and the government was unable to raise revenues because the privileged classes refused to contribute funds to the national emergency.
Marie Antoinette’s husband, King Louis XVI, was a well-meaning man who believed that his duty was to preserve his inherited regime. His inclinations were often progressive and generous, but he was surrounded by reactionaries who were threatened by any form of taxation. For more than half a century, the intellectuals and progressives of France discussed the possibility for a constitutional government, but nothing changed. Even though Marie and Louis had all the information and methods on hand to make constructive change, they did nothing. Instead, the queen chose to ignore these issues and did not encourage her husband to use his role as king to guide change.
On the other hand, King Louis did appoint excellent ministers who strove to solve the fiscal difficulties. Unfortunately, when they presented reforms, the reactionaries around the king urged him to reject them. This is precisely where the Queen could have stepped in to strengthen King Louis’ will, but she did nothing! 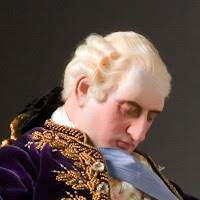 King Louis XVI failed to act in the face of change.
History reveals the disastrous results of inaction along with the horrors that followed the King and Queen. Like the reactionaries of the past, many Americans today choose to close their eyes to reform because of fear of change or of a diminished lifestyle. 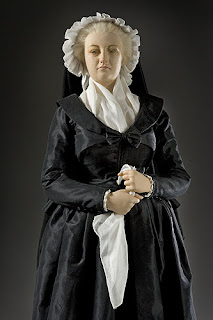 The revolution of 1789 overwhelmed the royal family, and they were imprisoned in 1790. Their titles were abolished, as was the monarchy, and the former king was tried for treason and beheaded. Marie Antoinette was separated from her children and also placed on trial. She had become the primary object of scorn, and her trial attempted to publicly humiliate her. Although this effort failed, she was still sentenced to death in October 1793. 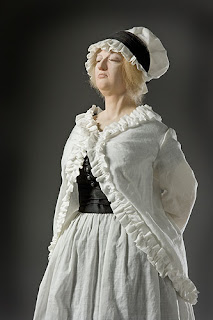 Following eight weeks of vicious treatment at the hands of her jailers, the former queen was made to dress in white (widow’s clothing might attract sympathy) and paraded through the streets of Paris in a hay cart to the place of execution. As further humiliation, her hands were tied behind her back and her hair hacked off to prevent the blade from “fouling.” She comported herself with great dignity that day and died with remarkable courage. She had become the symbol of all that was corrupt with the “ancient regime.”
Furthermore, they often refuse to vote, do not inform themselves on the issues, or they listen to demigods who pander to their worst inclinations. And unfortunately, like the people of France, this lack of action only hastens the possible ruin of the nation. Perhaps taking a lesson from the not-so-distant past and paying attention to the real issues is the key to staying informed and… keeping our heads!                                           - G.S. Stuart

We are pleased to welcome aboard Margaret de la M, who recently volunteered to edit Mr. Stuart’s articles for Figuratively Speaking Newsletter, our Blog and other media outlets.  Ms. De la M teaches college level English writing skills, so we will all benefit!  This article is their first collaboration, with many interesting works to follow.   —Leroy Becker