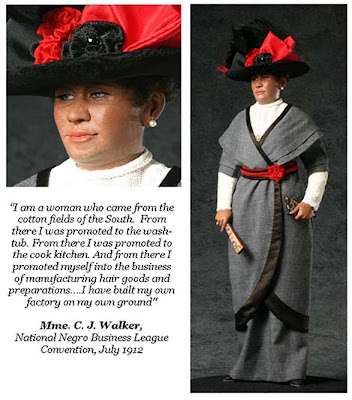 "For years I have wanted to do something to honor the history of black Americans," Mr. Stuart observes, "My intensions were impeded during my early years by booking agents who strongly suggested I stick to history with which my invariably all-white audiences would identify. Nowadays, Americans generally have a more sophisticated view."

"The Museum of Ventura County docent Patricia Trude has spoken with me on several occasions regarding my doing something in the area of black history. Mr.s Trude suggested that I look into the story of C. J. Walker (1867-1919)."

Image via Wikipedia
Indeed, Mme. Walker's history proved fascinating. Although little known today, C. J. Walker is an outstanding example of the American mythology - if you work hard and never give up, you will achieve success.

Mme. Walker went from house servant to becoming the first black woman millionaire and a major figure in the black American affairs. All of her successes came before the civil rights movement or the enfranchisement of women. Her story illustrates the remarkable quality of this segment of our population.

She was born Sarah Breedlove in Delta, Louisiana, the first member of her family to be born free. Her parents had been slaves. At age 14, she married a man named Moses McWilliams and was widowed at age 20. She then moved to St. Louis, Missouri to join her brothers. Sarah worked as a laundress for as little as a dollar and a half a day, but she was able to save enough to educate her daughter. While living in St. Louis, she joined St. Paul's African Methodist Episcopal Church, which helped develop her speaking, interpersonal and organizational skills. She was married in 1894 to John Davis and divorced about nine years later.

When she began to lose her hair, she had the idea for a line of hair care products. Like that of most other Americans in the early 1900s, Walker's home lacked indoor plumbing, electricity and central heating. Like many women of that era, she washed her hair only once a month. As a result, she suffered from severe dandruff and scalp disease that nearly caused her to go bald.

In 1905, Davis moved to Denver, Colorado, where she worked as a sales agent for Annie Malone, another black woman entrepreneur who manufactured hair care products. Sarah also consulted with a Denver pharmacist, who analyzed Malone's formula and helped Walker formulate her own products. In addition, she often told reporters that the ingredients for her "Wonderful Hair Grower" had come to her in a dream.

In 1906 she married Charles Joseph Walker, a St. Louis newspaperman, and changed her name to "Madam C.J. Walker". She founded the Madam C.J. Walker Manufacturing Company to sell hair care products and cosmetics. Madam Walker divorced Walker in 1910 and moved her growing manufacturing operations from St. Louis to a new industrial complex in Indianapolis. By 1917 she had the largest business in the United States owned by a black person.