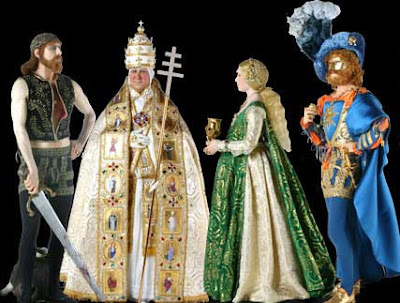 George Stuart tells us he selects his Historical Figures(R) for their political power and how they wielded it for good and evil. The Borgia Pope Alexander VII and his family certainly meet Stuart's criteria and thus became important players in Stuart's Renaissance and Reformation and Movement West Groups.

It's Showtime!
The creators of the new SHOWTIME miniseries about the Borgia family seem to  agree.  Their release is a dark, but elegant production, steeped in murder, sex, religion and political intrigue.
While Columbus was discovering the Western World in 1492, the Spanish Cardinal Rodrigo Borgia bribed, cajoled and blackmailed his way to the papacy. His eleven year reign as Pope Alexander VI was rife with all the sins. Some are even calling the Borgias "the Original Crime Family!"
Fans of the series and the historical period have their own gathering place on the web at the Borgia Wiki.

George Stuart's Borgia Family
For fifty years, Stuart has spun tales about the intrigues of Pope Alexander VI and his illegitimate offspring Cesare, Juan (Giovanni) and Lucrezia. In that same time period, a dozen movies, some serious, featured the Borgias and their infamous times.
Stuart's Historical Figures of Borgia family shown below can be viewed in more detail in the Renaissance and Reformation Group on our website. 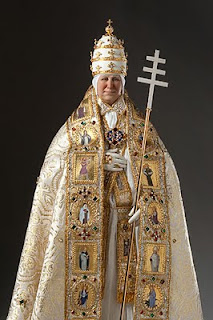 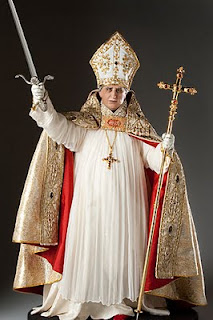 A second depicts the dramatic partitioning in 1494 of Spanish and Portuguese influence in the New World. Both of Stuart's Figures feature the exquisite detail of ecclesiastical garments later attempted by movie makers.
In the SHOWTIME Series, Pope Alexander is frequently shown in formal papal attire. A special page on the wiki describes papal vestments and regalia. 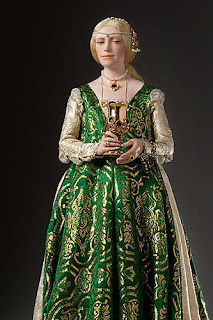 Lucrezia Borgia
Depending on the historian and historical references, Rodrigo's lovely daughter Lucrezia of ranges from an innocent to a murderer. The worst of stories claim she had incestuous relationships with her father and at least one brother. In the best versions, Lucrezia was an obedient pawn in the family's political strategies. Cesare Borgia
Of the family members, Stuart's vision of Cesare departs more from the SHOWTIME production. While Showtime gives glimpses of warmth and cruelty, Stuart sees only the darker side. Everyone seems to agree that Cesare was never cut out for the clerical position imposed by his father, and later performed well in military conflicts. 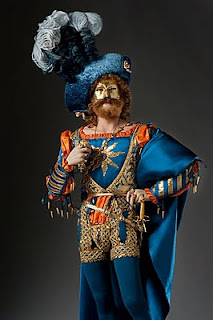 Juan Borgia
When a sporting fellow like Juan was given military command of the papal armies, it was not long before incompetence surfaced. Soon he was mysteriously murdered, and many historians accuse brother Cesare of the foul deed. Stuart portrays Juan dressed for Venetian Carnevale, a favorite event and akin to New Orleans' Mardi Gras .

The Borgia Historical Figures on Exhibit
In January 2012, the Museum of Ventura in Ventura California will open a four-month display featuring the infamous family. The exhibit will also include Historical Figures of Stuart's elegant Renaissance and Reformation Group. 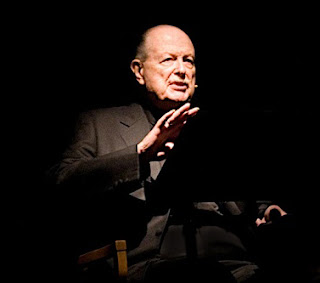 Monologs Feature the Borgias and Many More Historical Figures
During the exhibit, George Stuart will give three entertaining monthly Monologs on the Renaissance and Reformation Period in the Smith Pavilion.   Contact the Museum of Ventura for reservations.

Visiting Ventura and the Historical Figures
For information about events, museums, beaches, lodging and dining, see the Ventura gateway.